More than veterinary care providers, we are part of your family.

At Eco Deco Pet Hospital, most of the members of our staff have been with us for years, making us a family veterinary practice. We love pets, their parents, and the relationships we foster through a long-term commitment to pet health.

Take some time to get to know each of our staff members, and why they love working with your pets.

Get to know us 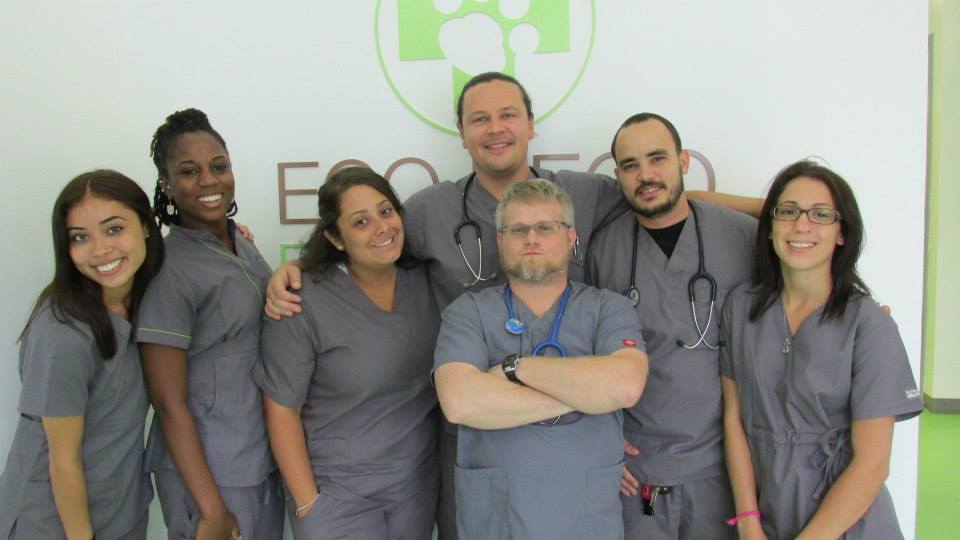 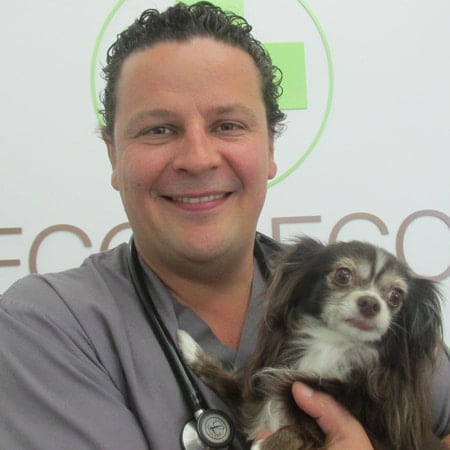 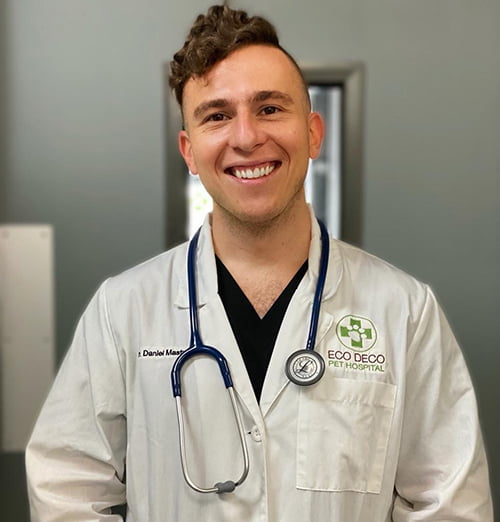 Dr. Mastrovito was born in Indiana but growing up as an army brat he spent most of his childhood in South America. He completed high school and college in Miami at Belen Jesuit Preparatory School and Florida International University, respectively. He obtained his veterinary degree at the University of Glasgow in Scotland in 2021.

His passion for veterinary medicine started in Argentina, during an equestrian showjumping competition. Dr. Mastrovito saw a horse with an injury on its face, and the veterinarian that was called fixed the horse in a matter of minutes. During his undergraduate degree he began volunteering at a general practice small animal hospital, quickly accepted a part time position, and worked as a vet tech from 2012 until 2016 when he started vet school. He has also worked as a tech every summer of vet school.

Dr. Mastrovito’s work as a vet tech confirmed he was in the right field, but he knew he had chosen the right profession when he completed his first surgery. Every time he performs surgery, he is reminded of why he chose this career. He is fascinated by all aspects of veterinary medicine, but his professional interests reside in small companion and exotic animal medicine, with a special interest soft tissue surgery. The last hospital he worked at as a vet tech was owned by a specialist in feline / canine / exotic animals, as well as in surgery. This veterinarian is extremely knowledgeable and has an incredible work ethic, thus setting the standard Dr. Mastrovito strive’s for in his own career. His first priority has and will always be his patients health and welfare, so seeing his skill and expertise lead to an overwhelmingly positive outcome in his cases has fueled me to do the same. He is a Member of the Royal College of Veterinary Surgeons, the British Veterinary Association, and the American Veterinary Medical Association.

Dr. Mastrovito’s father is a retired Lieutenant Colonel in the United States Army and the son of Italian immigrants. His mother was born and raised in Spain, and it is thanks to her that he is bilingual in English and Spanish. His brother is a professional musician with a master’s degree in classical guitar performance.
Outside of work, he is passionate about health and fitness, having been an avid lifter for over a decade. When he is not at work or in the gym, Dr. Mastrovito enjoys being out on the water paddle boarding, kayaking, snorkeling, or on the beach with a good book. He also enjoys traveling abroad and experiencing new places. 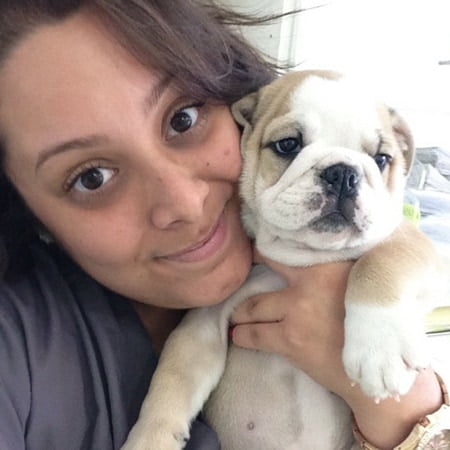 Veronica initially found her passion for the animal care field after stumbling upon a position at Banfield Pet Hospital as a Pet Counselor and quickly moved up the corporate ladder, eventually landing the title as Practice Manager. It was during her time there that she met the wonderful Dr. Valeriy Andreyev. Veronica became comfortable with Dr. Andreyev and valued his medical practice and business ethics. It was no wonder when Dr. Andreyev made the decision to open his very first practice, there would be no better fit than Veronica Cruz as his right hand.

One of Veronica’s goals is to expand the Eco Deco Pet Hospital brand into a chain of hospitals to better serve the community and their pet needs. In addition, she plans on becoming a Veterinarian Consultant who develops the veterinary business, assisting practice owners, and helping them become successful by building on the team’s skills.

When not at the office managing the hospital’s team and flow, Veronica is pursuing her Bachelor's Degree in Human Resources & Supervision at Broward College. She has already completed her 48 hours of continuing education credits with Patterson Veterinary Management University, in the hopes of becoming a Certified Veterinary Practice Manager this year.

While it may be true that most of her time is dedicated to serving our client and patient’s needs, Veronica enjoys spending her time outside the hospital tanning and soaking up the sun at the beach, as well as getting lost in a great book. She owns 3 rescued dogs, Reef, Bait and Shrimp. 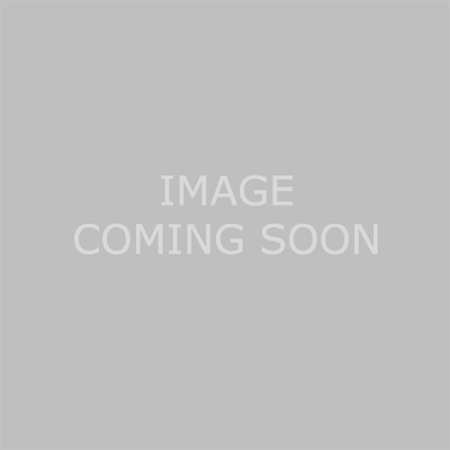 Irisana joined our team in 2020. She lived in Miami since 2004 and has always been interested in animals and veterinary science. She has her BA in English Literature with a minor in Women’s Studies.

Since she was little, she always dreamed of becoming a vet. She temporarily put that dream on hold when she realized there were so many other ways to help animals. As a patient coordinator, she gets a little bit of both worlds – clients and pets. Her favorite thing about working with animals has to be their different personalities and how they always seem to remember us when they come in through our doors! Irisana knew she was in the right professional when she realized that although she wasn’t a morning person, when it came to work she would wake up so easily in the mornings. Every day that she wakes up her work motivates her because she loves what she does.

Outside of work, Irisana is a quiet girl who likes to be holed up in her room reading a good book or listening to some good music. She likes to write, sing, and hang out with her pets for the most part.

Stephanie was born and raised in Miami, and on April 2nd, 2015, Stephanie made her debut at Eco Deco Pet Hospital as a Certified Veterinary Technician and is now our Lead Veterinary Nurse.

Her passion for animals started at a very young age. Since she was 3 years old she has always wanted to work in the veterinary industry. Stephanie’s favorite thing about working with animals is that they are unable to speak for themselves and through educating pet parents on the importance of preventive care we are able to help them have their needs met in order for them to live longer and healthier lives. When waking up to go to work was no longer just a responsibility, but something she looked forward to every day, Stephanie knew she was in the right profession.

Stephanie’s background is Brazilian, where she lived for 3 years and attended 1 year of Veterinary School before moving back to Miami. In Miami she attained her AS as a Veterinary Technician and passed the boards to become a certified veterinary technician. Stephanie enjoys spending time with her two shih thus named Ruby and Jade, king of a cat Onyx, rescue chihuahua-something Pebbles, and big boy Kane.

Recently graduated from the University of Florida with a major in Animal Science, Ashley joined the Eco Deco team in 2020. Born and raised in Miami, after spending a few years in Gainesville Ashley realized Miami was truly home.

Her passion for animals started at a young age and her goal is to apply for veterinary school. Ashley’s favorite thing about working with animals is the challenge of not being able to speak with your patient. No other field brings Ashley the same joy she gets from working with her furry patients!

Ashley has a Doberman called Walter, who is the best. She loves to workout and is a big fan of Gator Football!

Abigail joined the Eco Deco Pet Hospital team in 2019. Growing up, Abigail was mostly surrounded by animals and had many types of pets. So even at a young age, she felt more at peace in the company of any kind of animal.

Abigail enjoys knowing that she can make a difference, one pet at a a time. When she found the right practce that promoted a healthy work-life balance and mental health, she knew she was in the right place.

Mostly a homebody, Abigail is happily married and a mother to two handsome boys. She loves painting, creating, sewing, anything. She also loves the ocean and spending free time on the boat with her family!

© 2022 . Eco Deco Pet Hospital. Designed & Managed by ViziSites.Terms of Use.